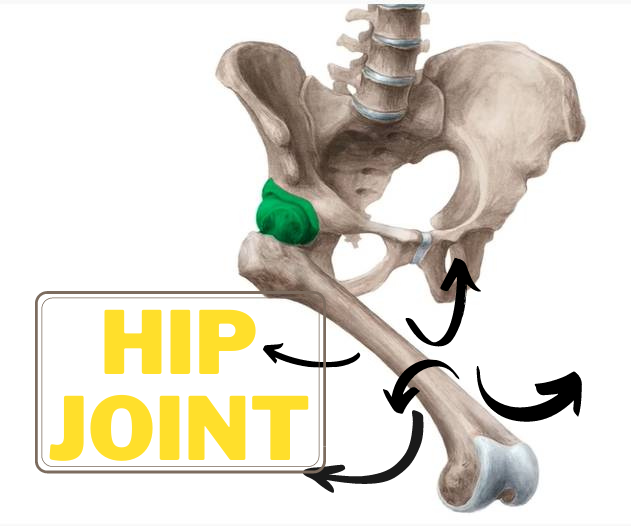 We are going to be looking at the hip joint, its articulations, movements, blood supply, and innervation.

So, the hip joint is a ball and socket synovial joint, forming the connection between the lower limb and the pelvic girdle.

And the hip joint is also multi-axial meaning that it rotates on more than one axis. Which allows for a wider range of movement. Of course, the hip joint is designed for stability and weight-bearing. 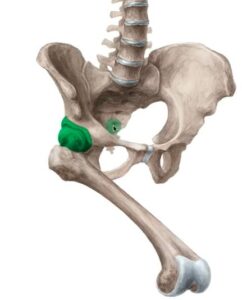 The head of the femur articulates with the lunate surface of the acetabulum of the pelvis. 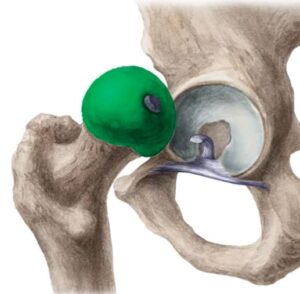 The lunate surface is concave, which is like the shape of a crescent moon as the name lunate suggests. And the hip joint can also be referred to as the acetabulofemoral joint. So, the acetabulum is the part of the pelvis where the ilium, ischium, and pubis bones merge and its concave almost entirely encompasses the head of the femur. Which contributes to the stability of the joint. 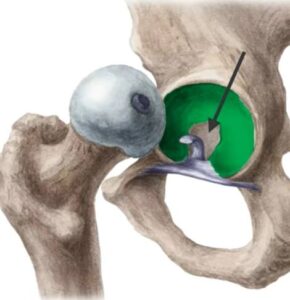 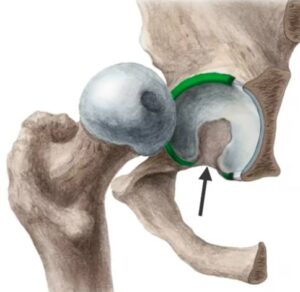 The labrum of the acetabulum increases the stability of the hip joint by deepening the acetabulum and increasing the area of articulation with the head of the femur. 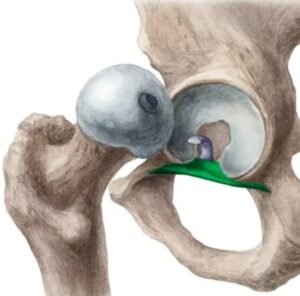 The ball of the ball and socket hip joint is the rounded head of the femur. Which sits within the concavity of the acetabulum, which is our socket of the joint.

The head of the femur is entirely covered by hyaline cartilage except for an area called fovea capitis femoris. 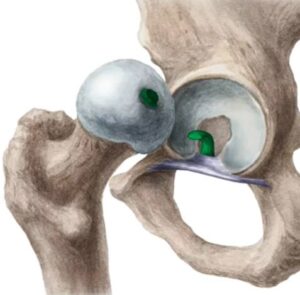 Capsule OF the Hip Joint:

So, the joint capsule of the hip joint attaches to the acetabular labrum and the transverse acetabular ligament proximally but is underneath the fibrous capsule. 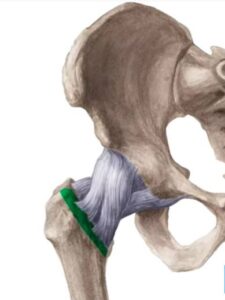 The joint capsule is a strong fibrous capsule that can accommodate a wide range of movements and the capsule is strengthened and reinforced by the help of three ligaments. Inferiorly and anteriorly, the pubofemoral ligaments arise from the obturator crest and the superior ramus of the pubis and blend with the capsule and the medial part of the iliofemoral ligament. Posteriorly, the ischiofemoral ligament seen here from a posterior view connects the ischial part of the acetabular rim of the neck of the femur. The fibers from the three ligaments are arranged in a spiral fashion around the hip joint which helps stabilize the joint by pulling the head of the femur medially into the acetabulum.

This reduces the amount of muscle energy required to maintain a standing position and prevents the hyperextension of the hip as well as excessive abduction.

Movements of the Hip Joint:

So the range of hip movement in the hip joint include Blood Supply of the Hip Joint: 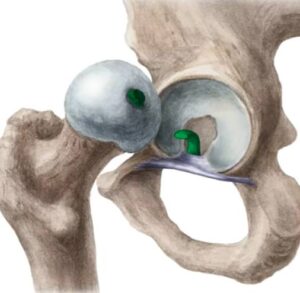 Innervation of the Hip Joint:

1. Innervation of the hip joint comes anteriorly from the femoral nerve.

2. Inferiorly from an articular branch of the anterior division of the obturator nerve. 4. Laterally from the articular branch of the sciatic nerve. 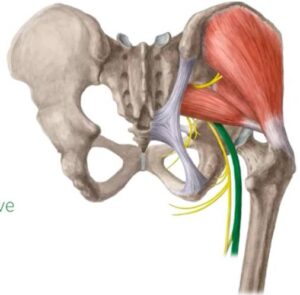 For further advice do reach out to your local doctor or family doctor. Muscles of the hip and Thigh – Human Anatomy?